The graphs below show the viewership of different TV programs among three different age groups. 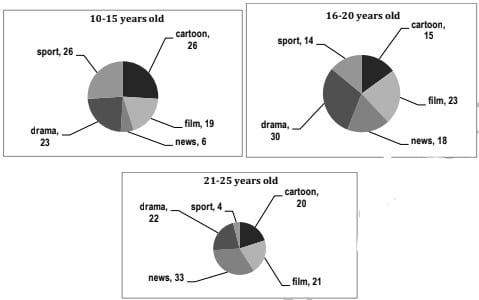 Among the 10-15 year olds, cartoon and sport programs are equally popular with a little over a quarter each viewing such programs. Drama is liked by 23% and films by 19% of this age group. News programs are watched by a small minority (6%) of these adolescents.

Moving over to the 16-20 age group, drama is the most popular with 30% watching drama. Films are the second most popular programs in this age group. Cartoons and sports are almost equally popular at 15 and 14% respectively. Surprisingly, news are three times as popular in this age group than the 10-15 year olds.

Talking about the 21-25 year age group, the popularity of news is double of that of the 16-20 year olds with 33% of this group watching news. Drama, films and cartoons are almost equally popular in this age group with around 20% watching these programs. Watching sports is the least popular among this age group with only 4% viewership.

Overall it can be seen that watching news is more popular among the older age groups and drama programs are the favourites of the 16-20 year olds.