The diagram below describes the structure of a home smokery and how it works. Summarise the information by selecting and reporting the main features and make comparisons where relevant. 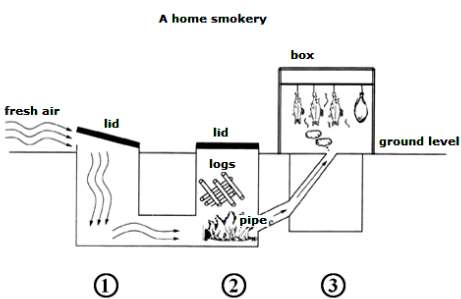 The diagram demonstrates how a home smokery works. It can be seen that there are mainly three steps involved in the process.

The home smokery machine has three parts. The first part is an empty underground section with a lid on top at ground level. Fresh air is allowed to flow into the machine by opening the lid. The fresh air then goes into the second part of the machine which is very similar to the first part. In this part, a fire is started by adding logs through the lid on top. Once the fire is burning, the heat from it is coursed through a narrow pipe that leads to a box. This box is the third part of the machine and is located at ground level. In the box, the food items that need to be cooked are placed. The heat coming from the second part of the machine cooks the food items.

Overall, the diagram depicts that there are three steps in the process of cooking food in a Home Smokery.

According to the diagram, the smokery has three chambers linked with each other by air passages at their bottoms. Two chambers are underground while the smoking box at the end of the process in above the ground.

As regards the working mechanism of the system, first, the lid of the first underground chamber is opened to feed the smokery with fresh air. Then the air travels to the second underground chamber to burn logs of firewood to create smoke. After that, the smoke finds no way to escape through the top of this chamber because of its closure by a lid, but it is forced by the air supply to continue to move to the third and final section of the system. In particular, smoke is channeled through a pipe up to the smoking box on the ground where fish and meat are hung for being smoked.

In general, the diagram details how smoke can be created and how food curing takes place in a homemade smokery.

An outline of the structure of a home smokery and the way it works are portrayed clearly in the given diagram.

Overall, it is clear that of the three steps, two steps happen under the ground, while the remaining happens above the ground level.

As shown in the diagram, the first part of the structure is an empty underground section with its lid opening at an elevated space above the ground level. This lid, when opened, allows air inside the structure to assist the smoking process.

In the second part, a similar structure is there with a lid at the ground level. This lid can be opened and wooden logs can be placed inside the chamber. Smoking food can be initiated when these logs are burned.

In the third part, a bended long funnel is directed upwards in a fixed structure, which has a wide opening at the bottom that connects the fireplace and a narrow opening at the top. When logs burn, smoke passes through this opening to the chamber above the ground level, inside which fish and meat are hung from the top for cooking.

Also Check: Caring for children is probably the most important job Essay